The new Model S from Tesla has landed in Lake Tahoe, California, for more winter testing ahead of initial deliveries that could begin as soon as April.

After making relatively minor updates to the Model S from 2012 on, rumors of a Refresh sparked after Tesla shutdown Model S and Model X production lines in late 2020. After tons of speculation, Tesla confirmed its new Model S builds by releasing photographs of the revisions with its Q4 2020 Earnings Call Update Letter. With a slightly modified exterior design, Tesla focused most of its revisions on the interior, changing everything from screen orientation to the HVAC system.

Since the release of the photos, the Refresh has been spotted several times. The first photographs of the Model S Refresh were obtained by Teslarati through The Kilowatts, revealing a slightly-wider body with new additions to improve aerodynamic performance. Interior photos came much later, but Tesla surely came through with its visions for the new Model S.

Now, Tesla is performing more winter testing with the new Model S. In February, the car was spotted in Toledo, Ohio, for winter testing. Tesla later teased the Model S Plaid’s winter testing sequences in a quick video clip that showed the all-electric flagship sedan ripping through the cold tundra.

Photos of the new Model S were spotted by Reddit user u/Oyinko, who took several photographs of the exterior and interior of the refreshed sedan from several angles. 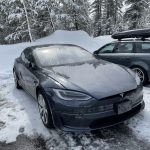 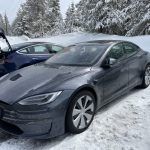 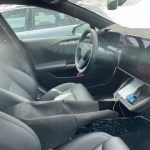 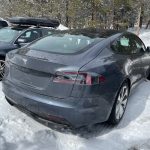 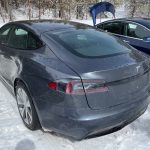 Interestingly, this Model S shows a round steering wheel, which hints that this is not a Plaid variant. Some pre-orderers of the Model S Refresh have told Teslarati that the Yoke Steering Wheel is reserved for Plaid and Plaid+ variants exclusively.

While the car’s exterior remained mostly the same as the previous builds, there were some minor changes. A rear diffuser is now placed under the body to increase aerodynamic performance by displacing air during travel. The front fascia also has slight revisions, and a new, larger central air intake vent helps improved airflow and battery pack ventilation. This could ultimately lead to longer battery life and performance.

The major updates came with the interior of the car, however. A new horizontal center screen dominates the front display, while a revised steering wheel design with buttons was also added. Tesla even added a new rear screen for those sitting in the back seat. The 8-inch display will provide entertainment for the rear passengers, offering them an opportunity to partake in all the fun that comes with riding in a Tesla.

Deliveries of the Model S Refresh were expected to begin in February. However, some delays have stopped Tesla from getting the vehicles to owners in that timeframe. However, Elon Musk recently told us that there were a few details to iron out within the Refreshed Model S design and that deliveries would begin soon. “There’s nothing else even close,” Musk said.

Still many fine details to address, but the final product will be fantastic. There’s nothing else even close.