Rumors surrounding the Tesla Semi are plentiful in this day and age, especially as sightings of the company’s commercial vehicle are becoming more frequent. Expectations for the new Semi are high already, and Tesla aims to deliver the truck in a timely fashion after several delays.

The new Semi has been spotted numerous times over the past week, hinting toward ongoing testing before Tesla starts volume production of the massive, all-electric commercial vehicle. Less than two weeks after Tesla’s Q4 2020 Earnings Call, where CEO Elon Musk and others detailed the ongoing offensive to develop the vehicle, the Semi is being spotted by people on public roads. Although Musk stated battery constraint is the hold-up in the Semi’s production, it isn’t stopping the company from testing several new truck builds.

Speculation regarding when Tesla will finally begin volume production is growing, and more rumors surrounding the initial deliveries to pre-orderers appear on what seems like a daily basis. However, the big bottleneck is batteries, and Tesla plans to combat this issue with wide-scale cell production and purchasing. The real question is, how many cells will be “enough?”

EXCLUSIVE: For a few weeks I’ve been in contact with a source from a U.S Tesla supplier. They supply certain parts for the S,X,3 and Y, but I’m here to reveal some info on Tesla Semi. As always, take these kinds of things with a grain of salt. Things/timelines can change.

Musk, who stated last year that it was time for Tesla to enter volume production of the Semi, had a different tune during the Q4 2020 Earnings Call on January 27th. Battery cell constraint is a major bottleneck in starting the Semi production, as fulfilling the number of orders it has would likely inhibit Tesla from being able to produce its mass-market passenger vehicles, like the Model 3 and Model Y.

Tesla has recently started producing its own battery cells at a plant that sits adjacent to its main production facility in Fremont, California. Known as the “Kato Road Facility,” Tesla is building its new 4680 cells there, a battery that Tesla claims will cut the cost of its vehicles massively, putting it on a crash course to reach price parity with gas-powered vehicles. The Semi will require significantly more cells than any other Tesla vehicle to date, a problem that the company is aiming to solve by producing its own cells and buying additional ones from third-party suppliers like Panasonic.

Tesla’s 4680 Kato Rd. facility has a top 10 capacity, and it’s not even close to finished

During the Earnings Call, Musk said:

“Prototypes are easy. Scaling production is very hard. So a big part of the reason — the main reason we have not accelerated new products is — like, for example, Tesla Semi is that we simply don’t happen our cells group. We — this — if we were to make the Semi like right now, which we could easily go into production with the Semi, but we would not have enough to cells built for it right now. We will have cells group in ourselves for Semi when we are producing the 4680 volume. But for example, Semi would use typically five times the number of cells that a car would use, but it would not sell for five times what a car would sell for. So it kind of doesn’t make — it would not make sense for us to do the Semi right now, but it will absolutely make sense for us to do it as soon as we can address the cell production constraint. The same would go for that.”

Effectively, Musk explained that it makes more fiscal sense to focus on the mass-market consumer products for right now. When the Kato Rd. Facility begins a massive production of the 4680 cells, Tesla can begin the Semi production efforts, but that doesn’t mean prototypes aren’t on the road now.

Following a sighting by The Kilowatts last week, two new sightings of the Semi have surfaced of the all-white Tesla commercial vehicle.

One video from Cory Draper on YouTube shows a four-and-a-half-minute-long walk around of the Semi, getting a close-up look at the vehicle. One of the most striking features is the size of the power cell, as Draper estimates it is between four and five feet in length. A massive truck requires a massive power source, and the Semi’s sizeable battery storage compartment will drive the truck’s 300 or 500-mile range. Another video from Ivaylo Tzintzarsky shows the power cell from the opposite side. 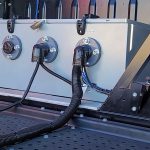 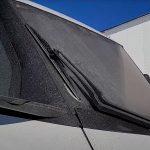 There are also numerous sensors that can be seen on the Semi, especially in Draper’s video. The top of the windshield is outfitted with at least five sensors that will help with the autonomous driving functionality of the Tesla Semi. Autonomy could help with the evolution of the trucking industry, as many drivers are currently restricted to 11 hours of travel per day, according to the Federal Motor Carrier Safety Administration (FMCSA).

Fuel savings alone could pay for a Tesla Semi, as the company estimates it will save at least $200,000. Combined with superior aerodynamic performance and, a quad-motor powertrain, and a low center of gravity to prevent rollovers, the Tesla Semi has the potential to revolutionize the trucking industry forever. The question is: When will it begin production, and how long until Tesla can produce the 4680 cells in mass quantities to solve the constraint issue?

Watch the two newest sightings of the Semi below. Let us know what you think in the comments!

The post Tesla Semi production rumors swirl as frequent sightings up the ante on expectations appeared first on TESLARATI.